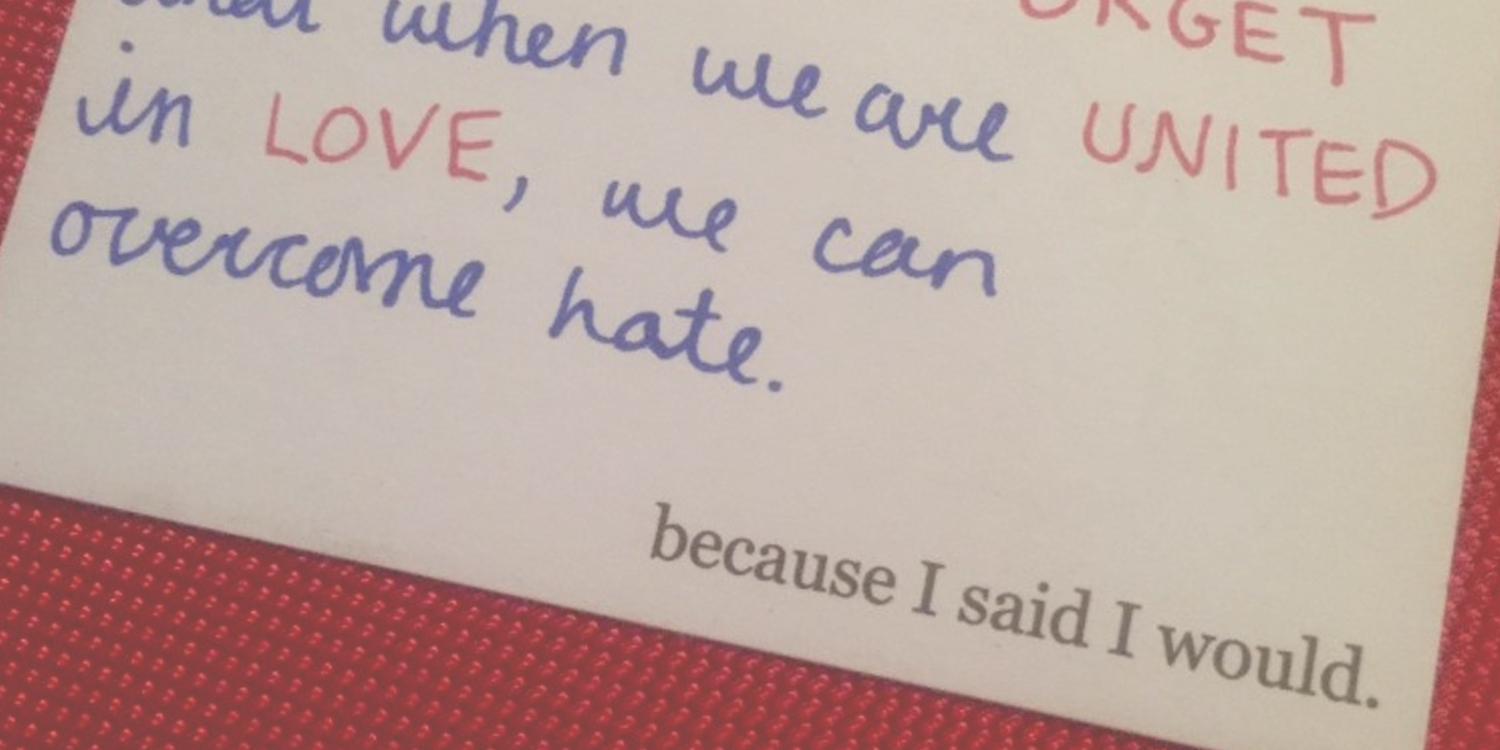 I hate the “Never Forget!” rally cry of 9/11
…because sometimes I wish I could forget.

I wish I didn’t know what it sounds like when a commercial airliner hits a skyscraper. Or the noise a falling body makes when it hits a roof. I wish I couldn’t still see the glowing screen on my 13″ TV as I lay in bed that night, watching Dan Rather’s grim face tell me that the world I woke up to that morning didn’t exist anymore.

Even now, fifteen years later, I could take you back to my high school and plant your feet on the same spot in the second to last row of the science lab where I was standing when someone first said the words “a plane hit the World Trade Center.” I could walk you to the bathroom where I called my mom from my contraband cellphone and show you the classroom I stepped into moments later and saw video of the towers collapsing for the first time. I could take you to the school courtyard where my friends and I picked at our lunches while nervously glancing up at an empty blue sky.

The sad truth is, I will never forget that day whether I want to or not. I’m sure a lot of you feel the same.

But there are two things that I actually want to remember from that day.

First, is the sight of our driveway when I turned the corner on my way home from school. Sometime during that awful day, my dad took the American flag off of the pontoon boat in our backyard and attached it to our mailbox. I don’t think I’ve ever asked him why he did it, but I don’t need to. I know exactly why.

As he watched the events unfold that day in New York, Washington D.C, and Pennsylvania, my dad no doubt felt the same way so many of us did — helpless.

We couldn’t go to Brooklyn and walk with the dust covered masses across the bridge. We couldn’t take water and a hot meal to the first responders who survived. We couldn’t comfort the families who lost loved ones.

But we could hang an American flag in the yard. Fifty stars and thirteen stripes, stitched together to symbolize that we are united as one. That flag told the rest of the country that we shared the burden of the grieving, we shared the gratitude of the survivors, and we shared the strength of a nation that was built from dust before and could be rebuilt from dust again.

Prior to 9/11, I didn’t realize that people hated America.

To be fair, I was sixteen and living the privileged life of a middle class white kid in suburban Florida. My cultural exposure at that point was mostly limited to a brief trip to Tijuana during a family vacation in San Diego and a weekend cruise to the Bahamas.

I did incur a few cracks in my delicate worldview just a few weeks before 9/11 when I traveled to Spain for a cultural exchange program. During my two weeks there, I got into a few political discussions with some of the Spanish students in our group and, from those talks, I picked up just a slide of the international perspective on America. They seemed to find us bossy, brutish, ignorant, and incompetent.

Following the botched election of 2000, that wasn’t particularly surprising. I could understand doubts in our political system (I certainly had some after all those hanging chads) and less-than-favorable opinions of our new commander-in-chief (I had those, too).

But late in the evening on 9/11, as the events of the day really began to sink in I realized what a depth of hatred would be required for someone to plan and execute such a massive attack against civilians.

In tears, I went to my mom that night and asked how anyone who had never met me could hate me just because they didn’t agree with my culture.

Fifteen years later, I know what the look of unabashed, ignorant, cultural hatred looks like because I have seen it in the eyes of my fellow Americans.

Understand this: If you hate every Muslim because of 9/11, you are no better than the terrorists who attacked us.

They carried the same righteousness and supremacy in their hearts that you do when you treat someone with disdain just because you don’t understand or agree with their culture.

Bad people in this world come in all shapes and sizes. They come from every state, every country, and every culture. You can condemn them individually, but if you apply blanket hatred to a whole group you are forgetting what 9/11 taught us.

Because I said I would.

Earlier this week I was at a conference in Orlando that featured a keynote speech from Alex Sheen. Alex started the “Because I said I would” movement after his father passed away from cancer four years ago. With a handful of little white cards, Alex reminded us all that our words have value. When we make a promise, we have to keep it, because we said we would.

I’ve been thinking about what promises I can make with the cards Alex handed out at our conference. Today I’m ready to make my first one. 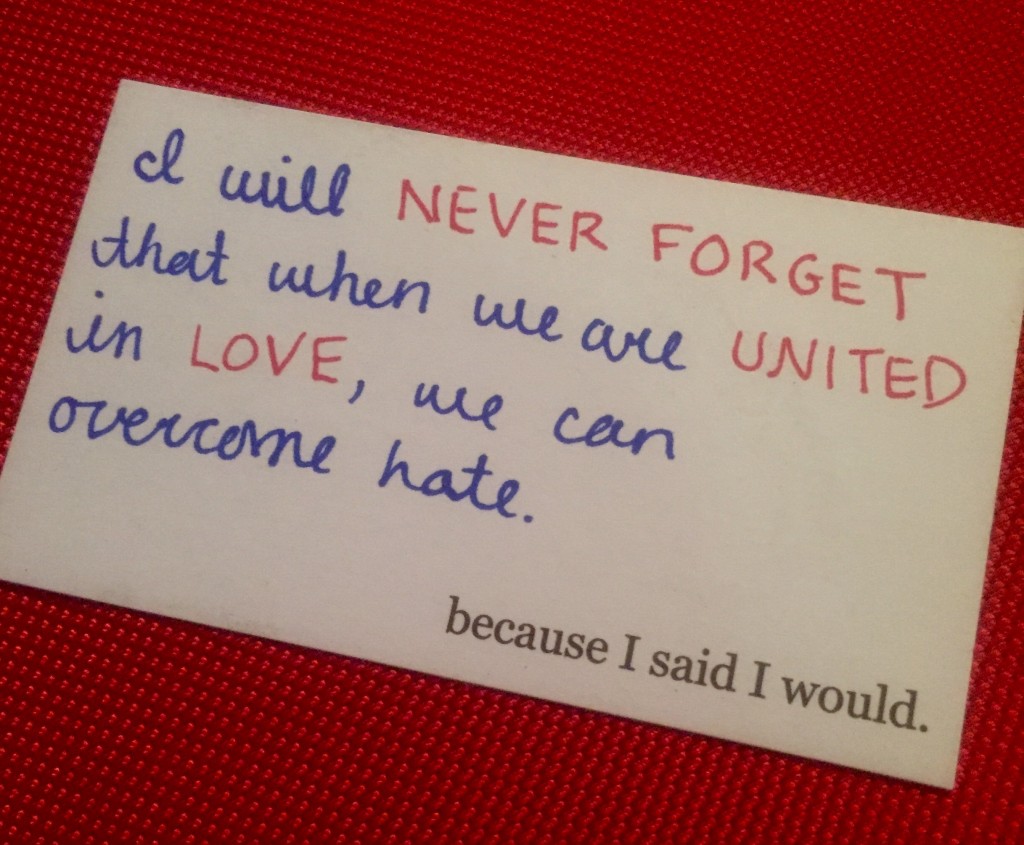 Here are a few other things we should remember today:

Author: Shannon
Filed Under: Archive
Tags: 9-11, Because I Said I Would, Never Forget
Hello? …. Anyone? … Bueller?