I’m a people watcher by nature. I love it. Put me on a park bench in front of Wal-Mart and I could entertain myself for days. There are characters created by nature that even some of the best writers could not come up with in their wildest dreams. Even with some of my friends and family, I find myself observing interactions and character traits looking for what makes them unique as individuals and trying to better understand what life looks like from their perspective.

Case in point, my four year-old “nephew” (I should clarify by parenthetical aside that he is not my biological nephew, he is the son of one of my best friends, but I have so many great friends that overtime we’ve blurred the line between friends and family–I love him like a nephew and that’s all that counts). A few nights ago, I was baby-sitting said Nephew at my house and he was taking a bath. I gave him a few toys to play with including a trio of baby rubber ducks, a squeezable dolphin, and three action figures: Batman, Spider-man and Catwoman. 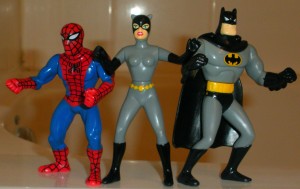 Of course he immediately decided that he was going to play Batman and Spider-man and gave me the role of playing Catwoman. Let me give you a quick rundown of these characters’ roles–

– Spider-man and Batman are in charge of (in this order): Punching people in the face, rescuing baby ducks and imaginary people from the treacherous waters of the bathtub, and dying/being miraculously resurrected.

– Catwoman is in charge of: Standing on the lip of the tub to watch over the lucky ducks and people who have been rescued and being really, really sad when Batman and Spider-man died, then really, really happy when it turned out they were alive.

After a while, I decided to test my nephew. While he was busy having Batman and Spider-man whip up on Joker, I hid Catwoman under the bathmat. When his heroes inevitably died, he looked to Catwoman to do her usual moping and mourning. 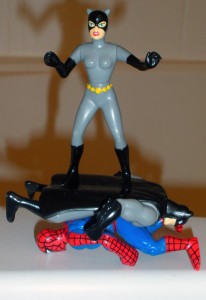 Me: She ran away. She felt under-appreciated.

Nephew: (Confused) But who will watch the ducks?

And just like that, my nephew went back to playing with Spider-man and Batman–who, I might add, did not show any concern whatsoever for Catwoman’s absence in spite of the fact that she’d mourned profusely each and every time they wound up lying lifeless on the bottom of the tub. Even when Catwoman returned, her cohorts didn’t seem to notice or even care. Catwoman was completely expendable.

What might be most interesting in this story is that my nephew’s wonderful upbringing thus far in life is strictly attributed to the strength of his single mom and grandmother. He is surrounded every day by strong women, and yet the television and movies he’s seen have still given him the idea that women sit on the sidelines while men do all the real work.

I’m not telling you this to sound like a feminist (I am not a feminist or anything close to it). To me, this is just a study in what makes people tick. Maybe my nephew’s character quirks will show up in one of my characters someday–a guy raised by women who still can’t see past society’s image of women.

Well, that’s my observation for the night! Maybe it will give you something to think about next time you’re playing with your kids or taking a moment at lunch to just watch the strangers around you. You never know when a story will strike!

Author: Shannon
Filed Under: Archive
The self-publishing journey is no longer a solo trek.
Past, Present, Problem