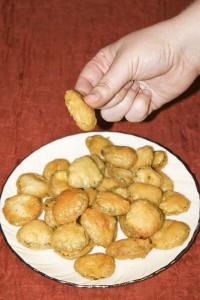 With less than a week standing between me and what will likely be my mental undoing (known in most circles as NaNoWriMo) I decided to take a break from plotting and planning to do a little research for my project.

I had to fry some pickles.

Last week I mentioned that I’d decided to name my NaNo novel “Fried Pickles” but I didn’t elaborate on the plot behind it. Essentially the story is about a dysfunctional family (it’s similar in that respect to my first novel) with four half-siblings whose very separate lives collide when their father passes away. The central theme of the story is forgiveness, because each of the siblings has an unresolved issue of forgiveness that’s preventing them from having good relationships in their lives.

So what does this have to do with fried pickles?

Well, the father in the story (his name is Hank) owns a bar on a little island off the Florida panhandle. The island is a resort haven stacked with multi-million dollar mansions except for the disheveled cinder block building known as the Sandbar. It’s only survived on the wealthy island for so long because of the one and only food item on the menu: fried pickles. It’s a top secret family recipe and Hank’s youngest daughter, Harper June, is determined to keep the bar and the fried pickle recipe alive. 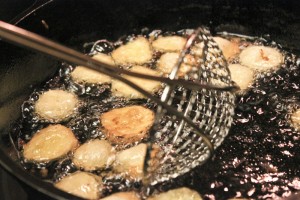 Now, I happen to love fried pickles. I am half-Alabamian, so it’s in my blood. But while I’ve consumed copious amounts of fried pickles in my life, I’ve never actually made them myself. So I figured before I write about it in my book, I needed to actually experience what it’s like to fry pickles.

I called in reinforcements as soon as I decided to fry pickles. My cooking skills start with ramen noodles and end with grilled cheese, so frying anything is way–WAY–beyond my meager abilities. Toni agreed to help me (mostly because I went on and on about fried pickles until she wanted some so bad she couldn’t stand it).

We searched recipes and originally planned to make two different kinds (beer batter and a cornmeal breading) but the beer batter variety was so good there was no way anything else could be better. Also, our recipe made a TON of batter so we felt like we had to use it up. Toni’s job was making the batter, dipping the pickles and adding them to the oil. My job was patting the pickles down (a very delicate, important part of the process) so that the batter would stick better. I also got to flip the pickles in the fryer and pull them out when they were done (side note: this is the best job to have in the process because it means you get first dibs on the fresh, hot pickles). 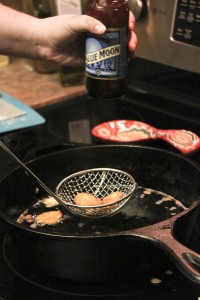 Also, both of our jobs included drinking beer.

It was a fun night and the pickles were amazing. I probably could have used my imagination to conjure up what it’s like to fry pickles, but now I know for certain and I can incorporate that into my novel. What’s the joy of writing is you don’t have a little fun with it?

My recommendation to all my fellow NaNo writers is that you take a break this weekend and do something really fun, whether it’s related to your book or not. Celebrate Halloween, indulge on some candy and kick back.

Because come Monday, it’s alll over…

13 days to go….are you sweating yet? National Novel Writing Month (NaNoWriMo) starts in just over two weeks! Are you guys getting excited? Scared? Nervous? Stressed? I’m a little bit of all four, but most of the bad feelings are getting masked by my excitement. […]

And the title is…
And then the panic sets in.

1 thought on “You can’t write a book called Fried Pickles without frying a few pickles.”