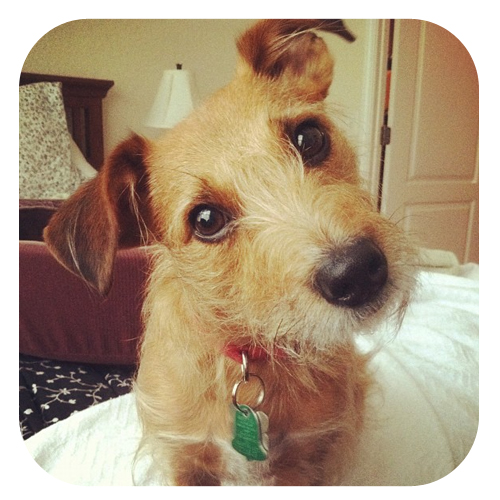 It’s been almost a week since my roommates (that sounds better and less pathetic for a twenty-eight year-old to say than parents, right?) left on a last-minute trip to Alabama where my grandfather is recovering from a bad fall.

Though of course I was upset about my grandfather’s health troubles (for the record he’s doing much better and has finally been released from the hospital), I was not entirely disappointed to suddenly have the house to myself for a few days.

Our two bedroom two bath condo (in what masquerades as a family neighborhood but is in fact one step shy of a retirement community) is lacking in many things, chief among them is privacy.

Of course, I’m not entirely alone.

In fact, I have a new bed companion who loves to snuggle and shower me in kisses in lieu of an alarmed wake up call each morning.

His name is Bucky.

A rescue dog found wandering at the local county fairgrounds, Bucky has been part of our family for two years now. As pets are wont to do, he has quickly weaved his way into the tapestry of our daily lives, such that it seems he’s been part of our pack forever.

Like most rescues, what he lacks in manners and discipline he makes up for with truckloads of character.

When we adopted him from the shelter, his given name (from his original owners who lost him while on vacation in Florida and elected not to return to get him…*withholding judgment*) was Buckwheat. Right away we knew we could not walk around any park in the South calling out “Here Buckwheat! Come fetch your treat, Buckwheat!” so we shortened his name to Bucky.

A complete re-branding under the famed moniker of Napoleon would have been more appropriate given his severe case of little-man complex.

When Bucky looks into the mirror, he sees Kujo staring back at him.

I have a working theory to explain this.

After a few days lost in the woods all alone (tortured by the local wildlife and scared out of his mind) and a few more days in a crowded shelter (picked on by other dogs and still scared out of his mind) Bucky decided whoever rescued him from his traumatic circumstances would be repaid tenfold with all the love and protection his 17 pounds of fur and spunk could provide.

As a result, since coming to live in our home, Bucky has made it his personal mission to do exactly those two things: Love the family and protect the family.

Indoors, away from the threats of the scary world, Bucky is sweet as pie (as we say here in the South). He will cover you in kisses, snuggle with you in bed, entertain you with tricks, and be the all-around smart, friendly, happy dog we know him to be. 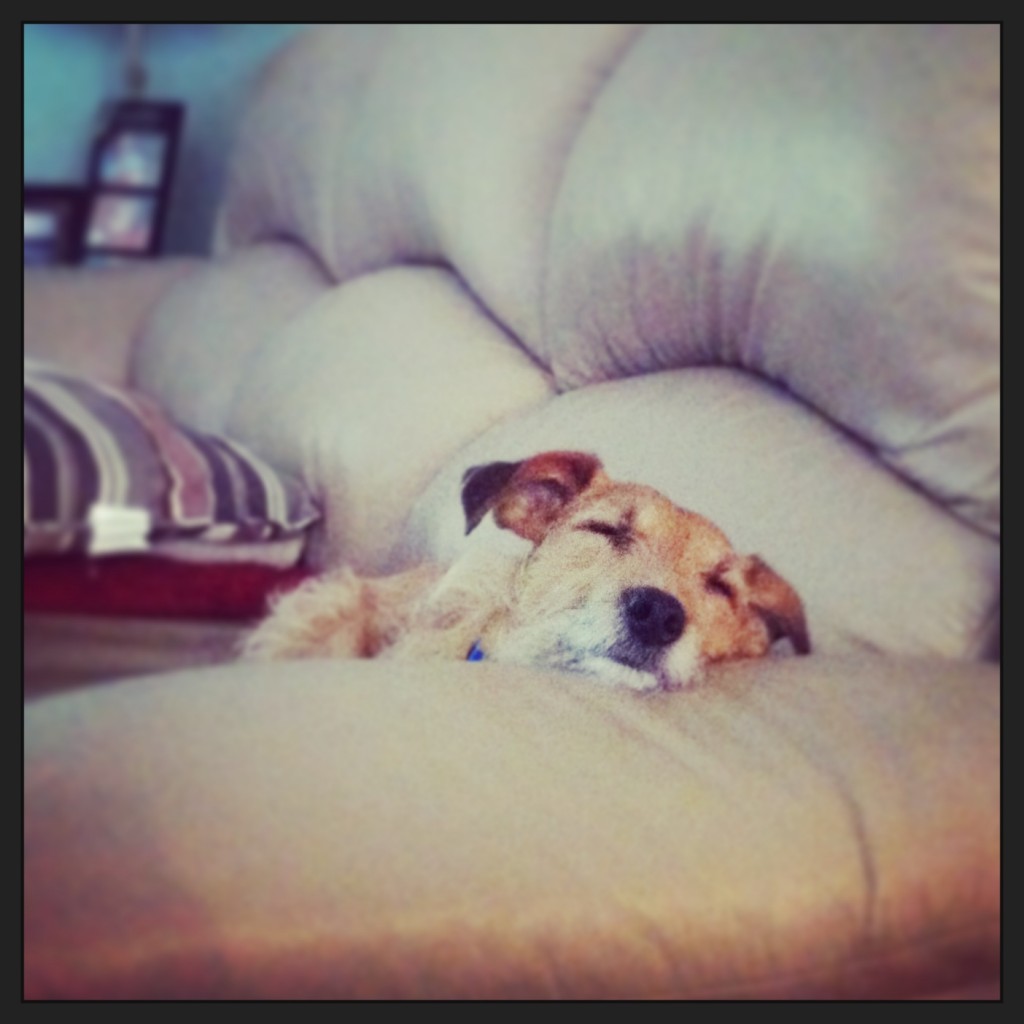 Outside, however, is a different story.

Bucky is on a one-dog mission to eradicate this Earth of lizards, frogs, birds, squirrels, and most especially other dogs.

(Also, motorcycles, bicycles, scooters, and the people who ride them.)

(Also, the people who mow the grass, anyone who even thinks about knocking on the front door, and our neighbor, Lenny.) 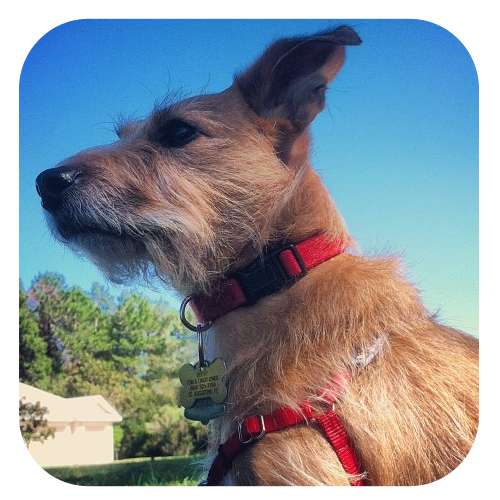 He also intends, I believe, to claim all of the land in the world for his family by peeing on everything that grows under the sun.

I took him for a walk today on a new trail not far from our house, intending to jog the path through a shady cypress grove. But it’s very difficult to keep up a good jogging pace when you have to stop every ten feet so Bucky can pee on something.

I know he ran out of juice less than a quarter mile in, but still he would plant his feet every so often and refuse to move until I allowed him to hike his leg and douse a nearby leaf with fumes.

It’s hard to know what to make of Bucky sometimes.

His Dr. Jekyll/Mr. Hyde personality is equally intriguing and frustrating. He’s been to three different training programs (my dad likes to say he’s “flunked out of obedience school three times” which isn’t entirely true) to no avail.

Most of those programs are more about training (or re-training) the dog owner’s behavior and that’s proved difficult, especially for my mom who does not have a dominant or aggressive bone in her body (how could she, living in the house with two people and a dog who have nothing but dominant and aggressive bones — we have to have at least one peacekeeper among us).

So Bucky remains the rescued enigma we love even as we struggle to understand him sometimes. 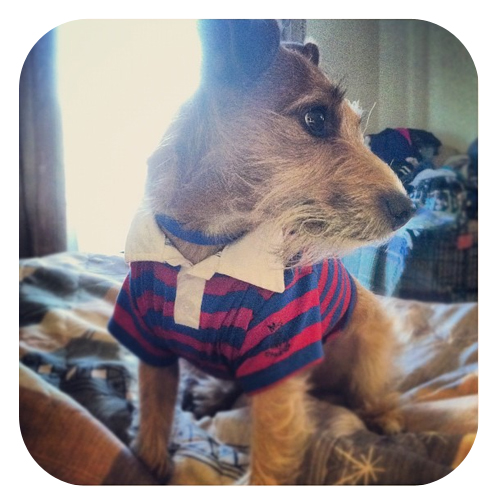 This last week as his sole provider of necessities has driven that point home for me.

The night before my parents left, he became angry and distant upon seeing the suitcases come out of the closet. He curled up on the couch and refused to move, finally acquiescing only enough to venture into my parents’ room, climb in his crate (of his own free will). and lie down with his back to the room as though he could not bare to watch them pack (or simply didn’t care to).

After the initial disappointment in their departure wore off, he decided to permanently attach himself to my shadow.

In the middle of my yoga routine, while I was trying to hold a 30 second plank, he gave me little kisses on the tip of my nose.

While taking a shower, his little head poked around the edge of the curtain just to say hello.

When I finished and pulled back the curtain, he was lying on the bathmat with a wagging tail.

But outside, on his leash, he becomes the dutiful soldier on patrol.

He must stop periodically to ward off the lizards by pouncing on all the tree trunks. He must pee on our usual bushes to maintain control of the street and keep it safe from enemies both foreign and domestic. 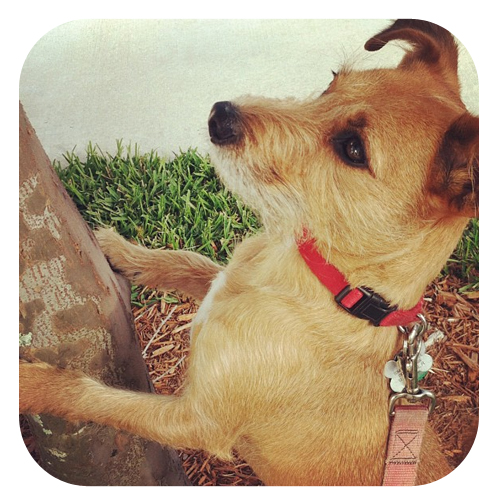 And if I dare to leave the storm door open on a beautiful spring day, he must remain in permanent position at his post to warn of any potential threats looming on the street (especially big dogs and poor Lenny). 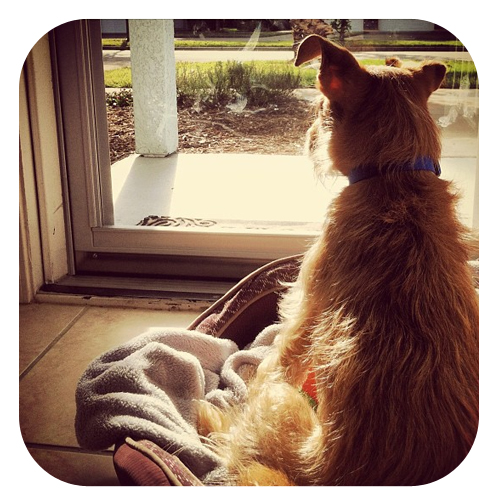 He is crazy, he is charming, he is incredibly smart and incredibly loud, but I love him nonetheless.

He is my little Napoleon Buckyparte. 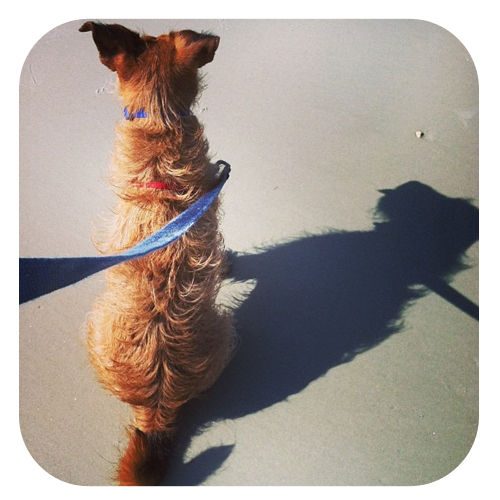