Remember way back in 2009 when the Swine Flu was going around? 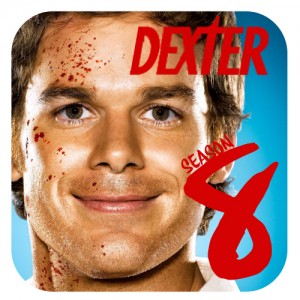 When my brutal flu test (seriously, it’s awful, like someone’s trying to poke your brain with a Q-tip via your nasal cavity) came back positive my doctor regretfully informed me I had to quarantine myself for the next three days — do not leave home, do not go to work, do not be around people.

Like, hello, I’m an introvert — three days at home by myself with a doctor’s permission to be totally anti-social and hermit-y is a dream come true.

(Well, other than the fatigue and nausea and sneezing and stuffy nose part.)

At any rate, I grabbed some chicken noodle soup and Gatorade (as a Florida State fan, being sick is the ONLY acceptable time to drink that gator-junk) and hunkered down on my couch for a three-day Netflix-and-PJ-palooza.

Friends had previously recommended Dexter to me and I thought now was my chance to give it a shot.

Three seasons and thirty-six hours later I was tap-dancing to the Dexter theme song in my kitchen.

Of course, a show about an emotionally unavailable serial killer is probably not the prime choice of programming when you’re cut off from the world for three days. By the end of my Dexter marathon, my mental state was questionable, but my swine flu was cured.

In the years since, I’ve kept up with Dexter by waiting (anxiously) ’til the end of the season and then binging on all the episodes at once.

But for the final season (starting next Sunday, June 30th)  I know that’s out of the question. Unless I abscond from social media for three months, I won’t be able to steer clear of possible spoilers.

So I’m going to reward myself for finishing Killer Shine with a Dexter Season 7 marathon this weekend and then I’ll be ready to jump-start Season 8 next Sunday.

What’s your favorite show to binge-watch? Are you a Netflix-er or do you prefer to record and watch on your DVR?