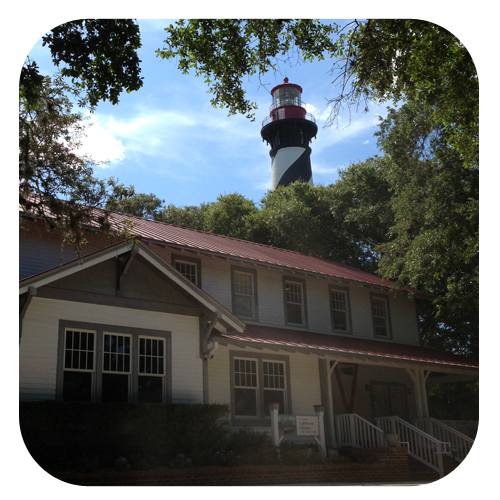 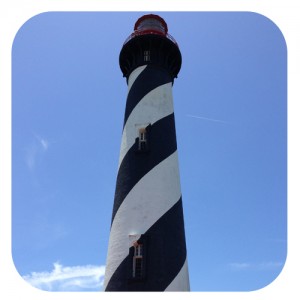 Did you catch it?

Actually, it wasn’t so much a hint — it was a tiny foreshadowing nugget I tucked in #7: Climb the St. Augustine Lighthouse.

I will most definitely be climbing the St. Augustine Lighthouse before the end of the summer, wanna know why?

Because it’s part of my new job.

Yep, after ten months of doing the self-employment thing (which I absolutely loved — I learned more about myself in ten months than I did in the three years before AND got much healthier mentally and physically in the process) I was lured back to the 40-hour life by the promise of a steady paycheck and health insurance.

(I’m almost *gulp* thirty *wince* after all, these things are important for a person of my age.)

But I’m not disappointed about returning to a full-time job because my new role is something I’m *REALLY* excited to do.

Growing up in St. Augustine is a trip. You’re constantly surrounded by huge, historical landmarks that are not only significant to Florida’s history, but to the history of our nation. And yet, they just fade into the backdrop of every day life.

One landmark in particular though, can’t really blend like the rest.

It’s 165 feet tall, striped and crowned with a big red cap and a bright light.

I’ve lived in the shadow of the St. Augustine Lighthouse for twenty-eight years and now I’m going to play a role in helping preserve it for future generations — so my kids can grow up in its massive shadow, too.

As the new PR person on the team, I get to share all of the amazing stuff going on with not only the tower and museum, but with our maritime archaeology crew, too.

In addition to preserving the tower (built in 1874) and the Victorian-era Keeper’s House (now a museum covering maritime history in our area) the Lighthouse crew also has an arm dedicated exclusively to maritime archaeology.

St. Augustine used to be a treacherous port (a new ship wrecked in the inlet every two to four weeks) and now our coastal waters are a graveyard of ancient vessels. Right now, the team is working on recovering artifacts from a 1782 British vessel that ran aground while trying to bring British loyalist evacuees to safety from Charleston after the American Revolution.

I will spare you the details of the entire story because I know everyone isn’t as passionate about history as I am, but it’s a pretty incredible tale. My first day on the job, I listened to the archaeologists tell the story to a pair of reporters and thought, “Man, people need to know about this, it’s unbelievable!”

And then I realized — Wait! That’s my job!

So needless to say, I have my work cut out for me and I can’t wait to get started…

…right after I climb those 219 steps to the top.