Ladies and gentlemen, we have a sequel! 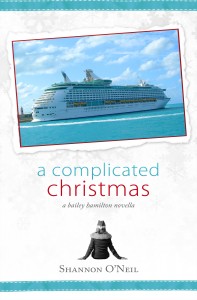 Last fall, while cruising the Caribbean with friends I got the idea for a sequel to I’ll Be Home for Christmas. At the time I was participating in my first NaNoWriMo, working on a separate (still unfinished) novel called Fried Pickles. As a result, I was only able to scribble down my ideas for the sequel before returning to my other project. Fast forward to a few months ago when I stumbled across my notes again and decided to pick it up and run. Originally intended to be a short story, it grew into more of a novella at just under 25,000 words.

If you loved the antics of Bailey’s enormous family and her complicated relationship with childhood friend Memphis, you’ll love this sequel, A Complicated Christmas. I plan to make it available as an eBook around Dec. 1st (it might take a little longer depending on their review process) but in the meantime, here’s a little excerpt for you to enjoy:

“What about you? Are you coming back for Christmas?” He asked casually.

“I’m not sure,” I replied honestly. “I was planning on it—I’ve already taken the time off from work—but after this weekend…”

“You’re a little overwhelmed,” he finished. (See? I told you he understands.)

“It’s not like last year or anything,” I said, remembering the four excruciatingly long days I spent at home for Christmas last year that nearly resulted in me cutting ties to my family for good. “But I feel like if I don’t take them in small doses, it could escalate pretty quickly.”

Memphis nodded. He’s been around my family tree long enough to know that it’s a massive botanical mess precariously perched on a ledge and held together in places with duct tape and twine. That’s what happens to your family tree when your parents divorce, leaving you and your two whole siblings dangling from forked branches while they remarry, procreate and divorce with reckless abandon. After all that, I have a total of 11 brothers and sisters including the aforementioned whole siblings (Becca and Brandon), three step-brothers (Simon, Mark and Josh), one step-sister (Lauren), four half-siblings (Robbie, Taylor, Maggie and Eli) and my adopted African brother (Ukembe). It makes for some interesting family get-togethers, to say the very, very least.

“So what will you do if you don’t come home? Just hang out in Boston by yourself?” Memphis asked. My response tumbled out of my mouth before I could stop it.

“I guess so…Unless you want to come up and hang out with me.” He smiled as I tried to keep the blush from building beneath the collar of my sweater.

“I don’t know about that,” he drawled, exaggerating his slow rolling Southern accent. “I’m not sure the big city and all that snow is where I want to be.”

“Oh yeah? Then where you would like to be?” Just as I said it, the football game flashed to a commercial of a family on a white sandy beach in the Caribbean. Behind them, floating high on sparkling emerald waters, was a massive white ship.

“That looks pretty good right there,” said Memphis, sitting up straighter in his chair.

“You want to go on a cruise?” I asked incredulously. “You live in Florida!”

Author: Shannon
Filed Under: Archive
Peacemas Review by Dale Cusack
With a flourish…