“Have patience with all things, but chiefly have patience with yourself. Do not lose courage in considering your own imperfections, but instantly set about remedying them — every day begin the task anew.” – St. Francis De Sales 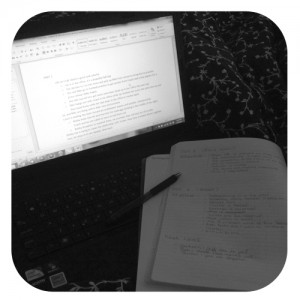 My NaNoWriMo WIP has been sitting in a metaphorical drawer since the end of last November, sharing space with the rest of my half-written works that must assume by now they will never see the light of day again.

But this is not the case, I promise.

Full-length Novel #2 *WILL* happen this year. Hopefully by late spring/early summer, though I’m not in a position to start setting dates just yet.

Progress on Killer Shine is moving forward, however, thanks mostly to my fabulous new editor friend, Brenda Errichello (eclecticeditor.com).

We’ve had a couple of super productive Skype meetings and just that little bit of back-and-forth chatter about my novel has renewed my passion and energy for the project.

A couple of quick things I’ve learned from the experience so far:

1. Let the characters tell the story.

Every author has a preference — plot over characters. My natural inclination is to create a host of colorful characters and then attempt to shoehorn them into some sort of plot.

This is not always easy.

But with Brenda’s help, I’m learning to be a better listener when it comes to my characters and what they want. Their motives and needs give me a plot because they (like the rest of us) all have conflicts in their lives that make for great stories.

I didn’t realize until I started going through my rough draft (which is only half-finished) that I had not one, not two, but THREE sets of twins in half a novel.

In a book that already has probably 20 or so characters, this is totally disproportionate and unnecessary. Especially if the twins are essentially the same person.

So two sets have now been condensed to one person each and I can already feel the increase in breathing room. Much better.

3. Don’t run away from clichés — make them better.

In staging a love triangle for my protagonist, I’ve been staunchly avoiding any involvement from her ex-husband because it just seemed too clichéd.

Girl, hung up on her ex/father of her child, unable to decide if she wants to move forward or try to resuscitate the past…we’ve all read that book before, right?

But after trying a number of options to dance around the issue, I realized I had the means to take their relationship out of the cliche box and create a unique obstacle that would give it a whole new dimension.

What new dimension was that?

It’s still a work in progress…

But by the end of March, I hope to share some new excerpts, news and plans because I want you guys to be as excited as I am about Killer Shine!

In the meantime, I’m off to do some major rewrites (Big kudos to Ryan Casey for posting these tips on making the rewrite process less painful!).