As we discussed around this time last year, I am on a very important, lifelong quest. 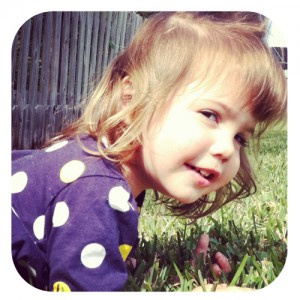 To become my niece’s favorite aunt.

Competition is stiff — my brother-in-law has two lovely sisters — but I’m hanging in the game, especially since Addison’s last visit when I introduced her to my enormous collection of Happy Meal toys (my secret weapon).

But as her third birthday approaches, I find myself facing a major bump in the road to success.

I can’t go to her birthday party.

You have no idea how bad I feel about this. But unfortunately, her party wound up coinciding with the #2 item on my Ultimate Concert Bucket List — Mumford & Sons’ Gentlemen of the Road Festival — which just HAPPENS to be coming to MY HOMETOWN for a whole weekend (sorry, I’m excited).

I seriously thought about selling my tickets, but after talking to my sister (and realizing that I have no recollection of my own third birthday party and who was there and who wasn’t) I decided to skip the party and douse my guilt in alcohol and great music.

But since I can’t make an appearance on the big day, I know I need to step up my game for Addy’s big birthday present.

She wants to be a pirate for Halloween (Because this kid is so cool Pirates of the Caribbean is her favorite ride at Disney!) so I decided every pirate needs a good treasure chest, right?

I also happen to be a huge fan of kids’ toys that spur the imagination (something that a lot of today’s video game-heavy society doesn’t always reinforce) so treasure chest filled with pirate goodies seemed the perfect fit.

Get started: The Perfect Pirate Chest

I began my quest for the perfect wooden pirate chest at Michael’s, where they have unfinished wood chests in three different sizes. The middle size was $15 — reasonable, I thought — but the chest was lacking in character. It didn’t have any hardware other than the hinges — no latch (Every pirate chest needs a good latch!) or rivets or anything of that nature.

Before jumping into a large-scale crafts project that would involve adding all these details myself, I popped over to Hobby Lobby just to check their options.

Here’s why I love Hobby Lobby: Half the stuff inside the store is on sale 40 – 50% at ALL TIMES. If what you want isn’t on sale, you can wait a week, come back, and it will be.

Fortunately, on my first trip I stumbled into a 50% off sale on their collection of decorative boxes, which included a variety of chests. I chose one with a curved latch and two leather snaps, plus a handle (a convenient feature for the pirate-on-the-go). 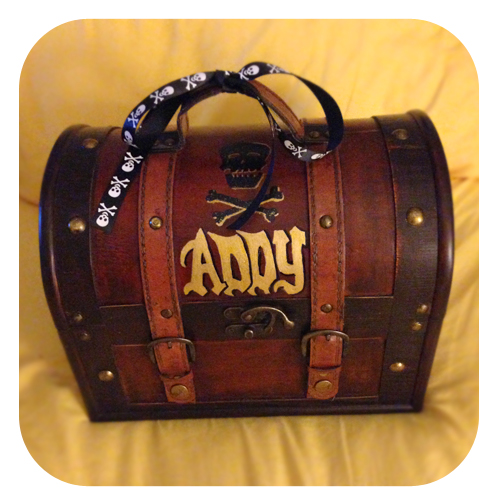 With gold and black paint pens (and the help of a Google font search) I personalized the outside of the trunk with Addy’s name and a skull-and-bones symbol.

Once my chest was complete, I began to scour the internet for things to fill it with.

Initially, I leaned toward the traditional pirate accouterments — coins and jewels.

Knowing my niece (like me) has the family sweet tooth gene, I wanted to find some chocolate coins but couldn’t find a reasonable deal for them online (also, as I recall, the kind of chocolate they use in those things is usually gross).

So instead I grabbed 12 dozen plastic pirate coins off Amazon (they’ll last longer, better to play with anyway). I also found a great pirate telescope and glow-in-the-dark compass on Amazon that went well with the eyepatch and sword I grabbed at the Dollar Tree.

My jewels came in the form of beaded necklaces (every little girl’s most coveted treasure). I picked up a dozen or so at the dollar store as well and found that my chest was already almost full! 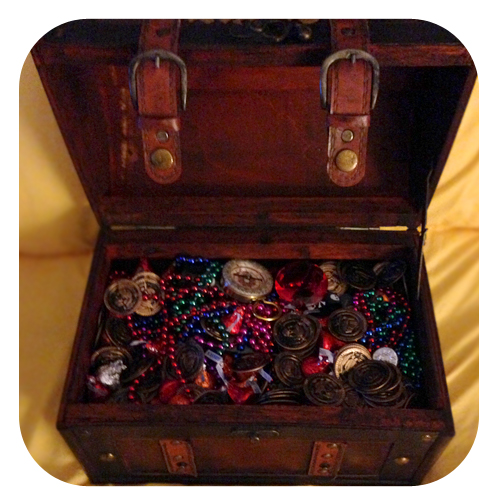 But you know how once you start looking for something with a specific theme, you start to see it EVERYWHERE?

Well, I popped into Michael’s again and found a pirate flashlight thing, skull & crossbones ribbon, and a big pirate-esque jewel. I also found a set of Jake & The Neverland Pirates maracas and a pirate puzzle to add to the mix.

I still had to throw in some sort of chocolate as well (to satiate the aforementioned hereditary sweet tooth) so I added some Hershey’s kisses for the final touch. 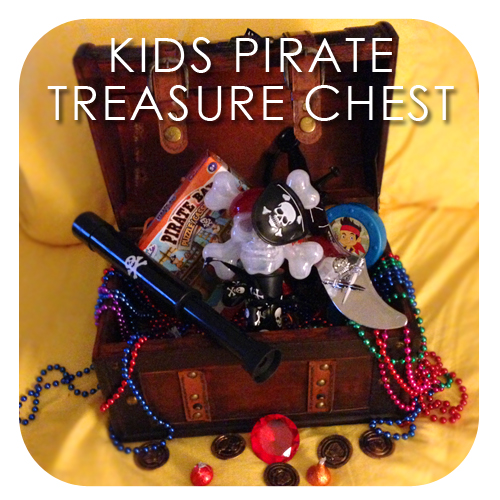 The Quest is Complete

I went up to see my niece last weekend so I could present my gift in person (and *ahem* be the FIRST to give her a birthday present — gotta score the points where you can).

She absolutely loved it (and I’m not just saying that, as you can see by the pictures). She layered on the necklaces, tore into the chocolates, and took her eyepatch and telescope for a test drive. 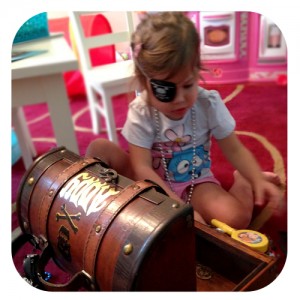 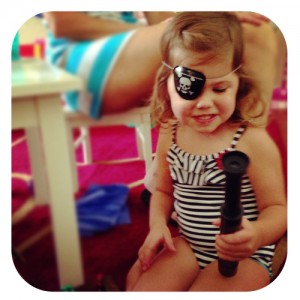 Seeing how much she enjoyed the treasure chest made me feel slightly less guilty for skipping out on her party.

If you’ve got a pirate-loving kiddo in your life, be sure to throw together a treasure chest of your own and let me know what you decided to use for filler!

Author: Shannon
Filed Under: Archive
‘Tis the Season
Then the walls of my town,
they come crumbling down